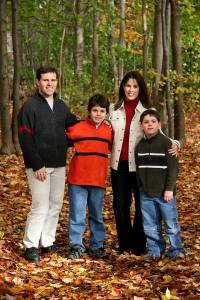 Happy Holidays! It is the festive season again. We have put in another busy year at our house. Here is an update on what we have been up to.

Our boys sure are growing up! Chandler finished off a great year in grade four and is now well into grade five. Grade five seems to be a big year; learning more self-responsibility, a heavier workload, and lots of extras like oral presentations and science projects. This big man turned ten in June and is very proud to now be over 100 pounds!

Chandler attends a small home group for catechism and is in his last year of Cubs. He enjoys being part of these groups. The Cubs are quite busy throughout the year with weekly meetings, tree planting, and fundraisers. They go to camp usually three times a year; including winter! In the spring they have a kub-kar rally; Chandler's favorite. It requires each cub to design, build and paint their own vehicle from a kit within the rules. The rally is held at a mall where they compete on long tracks. Chandler loves this event, as he is very much a hands-on kind of guy.

Connor had a very successful first year in French Immersion and now in grade two can pretty much say anything in two languages! By Christmas last year, his class was completely French; No English allowed. It's wonderful to see how fast they soak it up.

Connor turned seven in May and is in catechism this year preparing for First Communion (Mommy is one of the teachers). Connor is our soccer man! He played in our Stratford Under-8 division this summer for team "Subway". Many of his teammates were from his class and they had a team spirit that couldn't be beat! He now plays indoor soccer after school on Mondays and loves it. Connor is also enjoying his last year in Beavers. They are "busy" as well and even took part in a summer camp like Chandler. He got to stay up late and do all the "camp" stuff - Great fun!

Both boys enjoyed another summer of golf in Rustico with my Dad. He loves this time with them. They also took part in one of the "Future Links" camps for a week at Belvedere Golf Course. It was a fabulous program, very well run with lots of children. It truly is a great sport for them to be involved in. The boys took their two weeks of Red Cross swimming lessons in July at the CARI Complex at UPEI. It is a nice, new huge facility and they like it. Chandler's level this year was almost completely in the deep pool - lots of exercise! Connor's group was swimming like fish too. They got to try the deep water many times and he didn't take long to warm up to it. The first day for deep water was a nervous one with a life jacket on. It probably took all of three minutes until he was fine and that was the last day he wore a life jacket. Now we can't keep them out of the deep-end.

This summer, we were always on the go... parks, good ole Stanhope Beach, biking, bike rodeo, swimming, and the kids "Spud Fun Run" as part of PEI's Marathon weekend in October. In the midst of it all, we squeezed in our own little four-day family vacation to Cape Breton in August. We stayed in Margaree Forks, Baddeck, and Sydney. We saw the sites, did some beautiful hiking (our guys are great hikers!), the Alexander Graham Bell Museum, Fortress Louisbourg, and the loop around the Cabot Trail. It was a very jam-packed fun trip.

Mark is never at a loss for something to do... Great Hobbies is as busy as ever with lots of website and software programming, future development, and an ever growing staff that I find hard to keep up with. In October we had an early Christmas in our basement. In a matter of four hours we had set up and tore down a full Christmas "set" with tree, decorations, presents, fireplace… the works. We even had Christmas music playing. All for a photo shoot looking for the right image to be used on the cover of this years Great Hobbies "Holiday Guide". Chris Wilkinson took the photos and Gary was the "stage" manager! It was lots of fun and the kids thought it was pretty cool!

Mark and his co-owner Gary and the Edmonton manager Jim Soutar hit the big trade Show in Chicago in October and went out to Great Hobbies West in Edmonton for a week in November. They had very productive trips. Great Hobbies is also sponsoring RC-TV, a radio control TV show on OLN on Saturdays... Check it out!

Mark is still heavy into the cycling, logging over 3,200 kms this year! He is now a member of the board of Cycling PEI and was part of the organizing committee for the North Cape Coastal Ride, which he also participated in. He will also likely play a role in this year's "Tour de PEI", a new tour stop of the elite women's cycling world cup. His computer expertise helped come into play here as well, as he has rebuilt the CPEI website along with a couple of others.

Mark took part in many other events: bike races, duathlons, Biking for Breakfast (a one day PEI tip-to-tip fundraiser ride, 275km in approx 8 hours!), and even cycled the Cabot Trail with a group of friends from the Island in September. The Red Cross Relay couldn't go ahead without Mark competing in the event as a "Solo" again this year. In October, he finished his third marathon beating last years time, of course!

With all the cycling that goes on around here, Mark and I took a "Road" Officials Course in June to better train us at running road bike races. Over the last couple of years we are gaining lots of experience. Mark is usually competing and I am there anyway, so I may as well be helpful. I have done many tasks: running registration, timing and recording results. It is fun and quite exciting. The cycling gang is another great group of friends!

Well, I guess that brings us to me. I continue to do some childcare part time; all boys - I am severely out-numbered. They are all great kids! I continue to be a member on the board of directors for CHANCES family center - I'll stay as long as they will have me. I have also jumped on board with our Stratford chapter of CPF (Canadian Parents for French). There are five of us that work together to organize fun social activities involving French for the students outside of school. I am a member of our Home and School and volunteer in many ways. I love helping out when and where I can; it is very rewarding to play an active role in our school.

I have also begun a little tutoring in the school with a grade three ESL (English as a Second Language) student from Korea. However, he is probably teaching me more that I am teaching him! This year I am "team-teaching" Connor's grade two catechism class - alternating with another parent every second week. I still find time to go to the gym whenever I can, with an altered workout as I have experienced lots of knee troubles in the past year... &^%#$&(! On top of it all, I try to keep this house and home in order.

We hope 2006 has been good to all of you. We wish you and yours a very wonderful Christmas with Health, Happiness and Love for 2007!