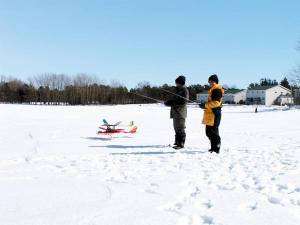 C Wright 2005 click to enlarge
Getting Ready For Take-Off

I heard the phone ring around 11:00am as I was struggling from my still sleeping stupor... It was Craig calling from Great Hobbies. He and Gary were going flying down at the Hillsborough Bridge a minute or so from my house; was I coming? Sounds like fun, I said!

When I got there, the boys were flying already, and I took a few photos from the roadway. The day was clear and where we fly, we were sheltered from light breeze, the sun felt strong on the face. The ice was snow covered and except for a few cracks and bumps our "runway" was quite smooth. Gary came down from his flight, refueled and loaded my handlanch glider onto our glider launcher. This is a device that allows a powered radio control plane to piggyback up a glider or non-powered aircarft and release it remotely at your desired height. Gary took off smoothly and before long was to a nice altitude, where both the plane and glider were looking quite small. He released the glider and I was now on my own. After a couple of minutes of looking up and flying around, my neck was getting a but sore, so I found a nice place to lay down to guide the small plane around the sky. I had started my stopwatch when Gary had released me from his plane, and by the time I had touched down, 14 minutes and 55 seconds had passed by... A great flight. Craig, took it up next and also had a good flight. We all took turns flying the two powered models, and by then it was time to call it a day.

Thanks for calling me guys, it was fun!